“Gold, unlike all other commodities, is a currency…and the major thrust in the demand for gold is not for jewelry. It’s not for anything other than an escape from what is perceived to be a fiat money system, paper money, that seems to be deteriorating.” – Alan Greenspan, ex-US Federal Reserve Chairman, August 23, 2011

If you have ever wondered what it might have been like to live in Weimar Germany in the early 1920’s, before the German mark collapsed, take a look at what’s going on in the economic and political system in the U.S. right now. Then, as now, the Central Bank was printing money at a furious pace in an effort to keep the system from collapsing and to fund Government debt payments and expenditures. 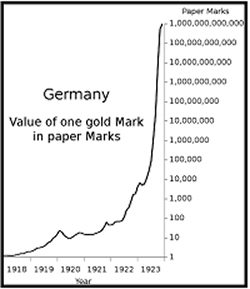 Much of the money ended up in the stock market, driving the German stock market to insane valuation levels that were completely disconnected from the underlying economic and social reality. Of course, the money printing-currency devaluation also drove the gold,
priced in German marks, even higher than the stock market. When the mark eventually collapsed and the currency system was reset, only those who owned physical gold were protected financially.

The stock market is reflecting the expectation of a “V” recovery in the economy. The Trump Government, specifically Treasury Secretary, Steve Mnuchin, believes economic activity will be largely restored by the end of August. It’s nothing but propagandist fantasy. I’d be stunned if he really believes that. This bear market rally in the general stock market is just that – a bear market rally. The same pattern occurred after the tech bubble popped in 2000. The Nasdaq plunged 40% followed by a 42% rebound rally. When the bear rally ran out of steam, the Nasdaq then proceeded to decline 42% over the next four months.

Where’s the “V?” – Obviously the Fed has injected monetary cocaine into the stock market to make it appear as if stocks are “discounting a “V” economic recovery. But a “V” on Main Street is nowhere to be found. Nearly 30 million working age people now receive unemployment benefits and other Federal jobless relief funds on a continuing basis. The real unemployment rate using the weekly jobless claims is well over
20%. To be sure, the economic reports, especially the “seasonally adjusted, annualized” gimmicked reports released by the Government, are showing a “statistical” bounce. As the economy opened back up after 2 1/2 months of closure of course there was going to be a rise in economic activity. But most households are struggling to make ends meet and many will be in dire straights when their jobless benefits expire and the politicians stop issuing vote-generating “stimulus” checks. 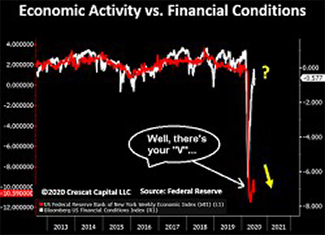 Nowhere is this reality more prevalent than in a recent survey which showed 30% of U.S. households did not pay rent or make mortgage payments in June. Another poll, conducted by the National Association of Realtors and OnePoll, showed that 52% of the respondents are worried about making mortgage payments. There is no “V” on Main Street. The only “V” is in the stock market. Over 90% of households do not benefit from the massive stock bubble blown by the Fed and the Government.

The Federal Government and corporations are issuing debt like there’s no tomorrow. The Fed’s money printing and its corporate bond buying has enabled a record $1.1 trillion in corporate debt issuance YTD this year, nearly twice the debt issuance pace of 2019. Compounding the potential problems from the massive load of corporate debt is the fact that close to 20% of all NYSE listed companies have debt service costs which exceed profits. Then there’s the Federal Government debt. At the end of 2019 the Treasury debt outstanding was $23 trillion. Less than 6 1/2 months later it stands at $26.4 trillion, a 14.7% increase. It’s on pace to be close to $30 trillion by the end of 2020. If the economy is in a “V” recovery, why are corporations and the Government issuing debt like drunken sailors?

The Fed/Government has brewed the perfect storm for precious metals and mining stock investors. We have no doubt that later this year, maybe even before the summer is over, the Fed will have to crank up another round of massive money printing. If, for no other reason, than to pay for the enormous issuance of Federal debt that will be required to fund the Government’s spending and to continue keeping the banking system solvent as more businesses and households file for bankruptcy, leaving $100’s of billions in non-performing debt.

We have maintained for a few years now that another financial and economic crisis was percolating that would make the 2008 crisis look like nothing more than a warm-up drill. The economy and banking system started heading into the “abyss” well before the virus crisis appeared in February. The Fed signaled this fact when it started printing money to keep the banking system solvent in mid-September 2019. Recall the “repo program” launched by the Fed back then. We were adamant the entire time that the “program” would increase in size and duration. It escalated to a trillion dollars before anyone had ever heard of “coronavirus.”

While we are always loathe to issue price and time-frame forecasts for gold, silver and the mining stocks, we believe strongly that the precious metals sector will be considerably higher by the end of the year than it is right now. The current bull move, that began in late 2015, will culminate when there’s a blow-off top like the one going on in the Nasdaq right now. That scenario is likely a couple years away. But we want to be positioned appropriately and aggressively when the stock market mania floods into the precious metals sector.