“Like gold, U.S. dollars have value only to the extent that they are strictly limited in supply. But the U.S. government has a technology, called a printing press (or, today, its electronic equivalent), that allows it to produce as many U.S. dollars as it wishes at essentially no cost.”

– Ben Bernanke, from a November 2002 speech given to the National Economists Club, Washington,
DC

That quote is an excerpt from Ben Bernanke’s infamous “Helicopter Money” speech when Helicopter Ben was a member of the Board of Governors of the Federal Reserve, before he was appointed Chairman of the Fed. It was a precursor to the Fed policy “tools” that Bernanke would pull out of his Keynesian bag of fiat currency tricks to bail out the banks during the Great Financial Crisis Part 1. In response to the financial crisis caused by the coronavirus crisis current Fed Chairman, Jerome Powell, has unleashed not a fleet of helicopters but a squadron of B-52 bombers to drop printed money onto the banks. But make no mistake, the coronavirus was nothing more than the “pin” that happened to appear out of nowhere to prick the massive asset bubble generated from the Fed’s response to the 2008 financial crisis. A severe banking and economic crisis had been gradually developing for a couple of years as result of the massive build-up in debt at every level of the system – Government, corporate and household.

In response to contracting economic activity and problems flaring up in the financial system (primarily accelerating stress in subprime auto, credit card, commercial real estate and corporate loans), the Fed started bailing out the banking system in September by printing half a trillion dollars to save the banks well before anyone had ever heard of coronavirus or Covid-19. It knew back in September that a massive credit problem was starting to bubble up.

In the 20 years since the peak of the internet bubble, gold has outperformed every major asset class: stocks (S&P 500, Nasdaq 100), long-term Treasuries, intermediate-term Treasuries and international stocks. This is an amazing feat considering that the official effort by western Central Banks, led by the BIS, to hold back the gold price and the massive effort by Central Banks to support stock and bond markets around the world (money printing, direct intervention). 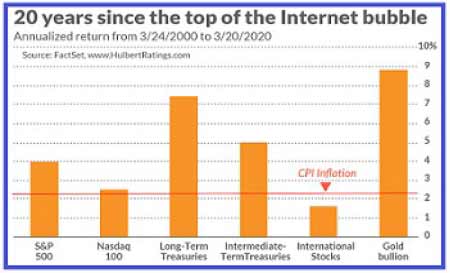 The Fed’s money printing operation started off gradually in September. The amount of money printed quickly escalated, as the hidden problems fomenting in the black hole that is the financial system transitioned from a beach bonfire to a full-scale forest fire. By mid-December, the Fed was printing money at a weekly rate that exceeded the highest weekly rate during the previous QE1-3 operations. The amount of money printed by the Fed is reflected in the Fed’s balance sheet, published weekly. The Fed’s balance sheet as of Wednesday, April 8, is now 35% larger ($6.1 trillion) than it was at the previous peak in December 2014.

This was before the Fed announced additional actions to provide up to $2.3 trillion in loans and asset purchases to “support the economy.” While some of the money is meant to trickle down to the small businesses on Main Street, the majority of printed money will be used to purchase municipal bonds and corporate loans and bonds, including junk bonds. The purchase of this distressed corporate is debt is extension of the ongoing Fed bailout of banks and large, leveraged hedge funds.

A “perfect storm” is brewing for gold, silver and mining stocks. In addition to the onslaught of Federal Reserve helicopter money, Gresham’s Law is starting to engulf gold and silver. Gresham’s Law states that “bad money drives out good money.” When Gresham put forth this proposition, gold and silver was the primary form of money. Governments at the time were diluting gold and silver coins with metals of lesser value yet the diluted coins were given the same value for legal tender purposes as the pure gold/silver coins. Gresham observed that the pure coins were hoarded while the diluted coins were used for trade. In other words, “bad” money chased “good” money out of circulation. Sound familiar? Go find pre-1964 dimes, quarters and half-dollars and try to buy them for their legal tender value. Pre-1964 silver coinage contains 90% silver. Post-1964 silver coins are made from nickel and copper. No one who holds pre-1964 coins would use them for their face value. They have disappeared from circulation. The melt-value of the silver in a 1963 quarter currently is $2.60 Over the last several weeks, gold/silver bullion coin dealers have been wiped out their inventory. Currently American silver eagles are being offered at $8 above the spot price of silver and 1 oz gold American eagles are offered at $100/oz over the spot price of gold. But that reflects the activity in the retail market for bullion coins.

The wholesale/”big boy” gold markets on the Comex in New York and the LBMA in London have been experiencing a run on the vaults. While the supply shortage is attributed to operational problems caused by the virus crisis, the truth is that this shortage of bullion was developing well before the first reported case of Covid-19. This is because eastern hemisphere countries, like Russia and China, have been converting their dollar reserves into gold bullion (see Gresham’s Law). Our Precious Metals Opportunity Fund was on track for a solid quarter until the stock market massacre that started in late February invaded the mining stocks as hedge funds frantically sold anything in their fund that had a buyer. Mining stocks and Comex gold contracts were among the assets that were easiest to sell when the stock market was in free-fall (for instance, low quality, non-investment grade bonds and derivatives had almost no buyers). Hedge funds were forced to sell in order to stay ahead of daily margin calls to cover margin debt.

Gold and silver were also systematically taken down in price in an intense manipulative effort led by the Fed and the banks that operate on the Comex. The price control operation was similar to the one that occurred in the summer and early fall of 2008 just ahead of the collapse of Lehman and the roll-out of the multi-trillion financial system bailout. Similar to this occurrence in 2008, gold was taken down as much as $280 in the two weeks before the Fed announced on Sunday, March 22, that it was cutting Fed funds rate to zero and rolling out an aggressive money printing (QE) program. While gold recovered most of its losses before the end of the quarter, the response by silver and the smaller cap mining shares was delayed until after quarter-end. Since March 31st, silver has popped up 13.5% and our equity portfolio has recovered over 12%. But this recovery is just getting started. After the massive manipulated take-down of gold, silver, and the mining stocks in 2008, in the final two months that year gold appreciated 14% and silver and the mining stocks more than doubled. We believe the upward movement in the precious metals sector will be significantly more powerful this time around because the Fed’s money printing ultimately will dwarf the amount of money printed between 2008 and late 2014.

Though nothing in the world of finance and economics is certain, we rest the bullish case for gold on the understanding that none of the economic and financial system problems that created a positive price environment for gold over the last nearly nineteen years have been repaired. In fact, the same problems now are much larger and more dangerous than in 2008.

With every government and Central Bank globally – led by the Fed – running their printing presses at an unprecedented rate of speed and volume, we are confident the coming upside move in the precious metals sector will surprise the investment world. In fact, we have never seen an investment opportunity as obvious as gold, silver and mining stocks right now.

We hope everyone is staying safe and healthy,
Dean, Don and Dave